In my many decades of working in the data center industry, I have seen plenty of praise for data centers coming from all sectors of society. People who benefit from an increasingly digitally automated lifestyle embrace the fact that there are data centers. Companies that profit from selling digital solutions and services to those same consumers value data centers. Governments around the world depend on over 30,000 data centers serving their tax-paying citizens.

Yes, everyone seems to agree that data centers are great!

In the beginning of the move to a digital world and the need for larger data centers, some towns around the world actually had programs to attract these new facilities. Building local data centers added local jobs during construction and on-going operation. Towns offered tax breaks and access to subsidized, low cost electricity and water. But data centers were getting exponentially larger and consuming more and more natural resources. We started seeing the size of these data centers measured in megawatts (millions of watts), then tens of megawatts, and now some are even in the hundreds of megawatts! A call for data centers to be more sustainable was set.

Data Centers in the Spotlight for Energy Use

As the growth curve accelerated, data centers were put more in the spotlight. In April of 2008, a joint study by the Uptime Institute and McKinsey & Company was released at the Uptime Symposium in Orlando. The study found that energy use among the top tier of data centers was soaring, rising at a 24 percent annual growth rate, and, at the release date, the energy consumption in data centers was almost 0.5 percent of world energy usage. The report stated that if current trends continue unchecked, data center greenhouse gas emissions will quadruple by 2020. To improve energy efficiency in large-scale corporate data centers, the Uptime report recommended three solutions:

I made a few interesting observations after re-reading the report:

“You talking to me?”

This report is rumored to have spurred Greenpeace to focus its attention on data centers from global internet giants (many based in the United States) starting in 2009. To its credit, the internet giant industry was already focused on dramatically improving data center efficiency with approaches like super high efficiency UPSs, free or high efficiency cooling, and aggressive use of server virtualization. When Greenpeace opened its investigations, the industry seemed to experience a moment like in the 1976 movie Taxi Driver when Robert DeNiro asks, “You talking to me?” Yes, Greenpeace became very public with its criticism of global internet giants in its Clicking Clean reports. These reports were updated periodically and featured a “clean energy index” and grading system using data from the companies or otherwise publicly available information. The index reflected how much clean energy (wind, solar, hydro), on average, the company used to power its data centers. Initial focus was on U.S. based global internet giants mainly because the European tech companies for the most part were way ahead in renewable thinking, and the Chinese data center ramp was still nascent.

One of the first internet giants to come under fire was Facebook. Facebook collaborated with Greenpeace on a plan for two years before coming to terms in 2011. Their plan focused on investing in and using renewable energy. This agreement went a long way in setting an example for the rest of the data center industry to follow. Today, Facebook’s data centers are carbon neutral based and its own 2019 Sustainability report says – “Our data centers are contracted for 100% renewable energy and are 80% more water efficient than average data centers.”

Showing the Way to a Sustainable and Carbon Neutral Future

Since this groundbreaking agreement, all internet giants have followed suit – let’s take a closer look at Apple, AWS, Microsoft, and Google. To clean up their carbon footprints, these companies (as well as Facebook) have invested in renewable energy generation via utility-scale Power Purchase Agreements (PPAs). Previously, PPAs were used exclusively by utilities to contract for renewable power. However, starting in 2008, commercial and industrial energy buyers began using the PPA model for themselves. Since then, companies have invested in several hundred megawatts of PPAs globally, primarily in wind, but increasingly in solar, and are credited with being one of the reasons for the exponential growth of renewable demand.

This year, Apple has committed (through a 99-page document) to total carbon neutrality by 2030 in its supply chain, operations, and products. Apple’s data centers are already carbon neutral. Apple will do this through a combination of reduction and offsetting. It plans to reduce its own carbon emissions by 75 percent compared to levels in 2015. It will balance the remaining 25 percent by using “high-quality carbon removal projects” to offset areas of its operation where carbon use is currently unavoidable.

Google has done a lot to decarbonize its data centers. In 2017, the company announced it achieved 100 percent renewable energy across all of its operations, including its data centers. Today, all data processed by Google Cloud has zero net carbon emissions. 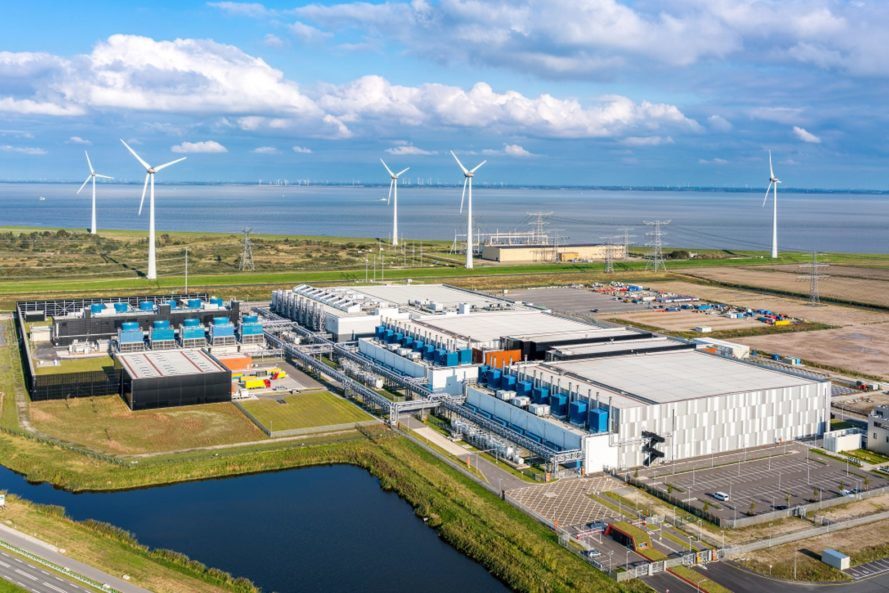 Google data center in the Netherlands with wind turbines

Microsoft’s goal is not only totally eliminating the environmental impact of its data centers, it plans to make them carbon negative. The company has been carbon neutral since 2012, and it has run on 100 percent renewable energy since 2014 (60 percent of its data centers will operate renewable power by next year). Microsoft has implemented an internal carbon price and charges its internal departments a carbon tax. In addition, by 2050, Microsoft pledged to “remove from the environment all the carbon the company has emitted either directly or by electrical consumption since it was founded in 1975.” Planting trees could be one way and capturing air and storing it in wetlands that can hold carbon is a way to actively remove carbon from the atmosphere, but Microsoft has not yet disclosed its method, just its intent.

Amazon Web Services is the largest cloud computing provider. In 2014, CEO Jeff Bezos announced a long-term commitment to power all of Amazon’s data centers with 100 percent renewable energy by 2030. AWS exceeded 50 percent renewable energy usage for 2018. In 2019, AWS announced three new wind farms in Ireland, Sweden, and the United States. When complete, these projects are expected to generate 670,000 megawatt hours (MWh) of renewable energy annually, which is enormous. The company recently revised its 2030 target and said it is “on a path” to reach that goal by 2025.

The global internet giants are making great strides in the race to eliminate carbon, but what about the fast-growing East Asia internet giants? Greenpeace East Asia and the North China Electric Power University have released their first-ever renewable energy ranking of China’s tech giants covering top tech giants like data center operator Chindata, Alibaba, Tencent, GDS and Baidu. As the report details, many of the companies are well on their way to reducing and eliminating carbon.

There were 196 countries that signed the Paris Agreement to address climate change by reducing CO2 emissions. Countries set their nationally determined contribution in percentage and 10-year intervals. It is expected that many countries will have a target of being carbon neutral by 2050. As I have shown, companies operating the largest data centers plan to achieve that well in advance. The praise for data centers may take a new form as they are showing the way to a sustainable and carbon neutral future.